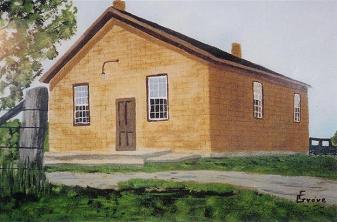 The founders of Wanner Mennonite Church were some of the earliest pioneers in Waterloo Region. Several Bechtel families arrived in 1800 and first settled in Blair and Preston. An early union community building, built on a half acre of land on Old Highway 24 and donated by Samuel Bechtel, was used for worship services, schooling and burials for all faiths.

The formation of Wanner Mennonite Church began in 1837 when the Mennonites erected a small white brick church at the south-west corner of Beaverdale and Maple Grove roads, on land donated and deeded to the church by Henry Wanner Jr. At the same time land was also deeded to the church for a cemetery. This building served the congregation for one hundred years. It was replaced by the present brown brick building in 1938; an educational wing was added in 1969.

The new church (1938) contained a small kitchen. To celebrate its completion, a church supper was held in the basement. An observant neighbour remarked that the end of the world must be coming since the Mennonites are having a church supper!

For more than a century, children from the surrounding community have been welcomed to the Wanner Mennonite Sunday School. From 1933 until recently,  a week or two of Summer Bible School was  held for  children in the community. The church has a history of welcoming visitors and people who are new to the community.